Are you thinking about buying an e-bike/ e-cargo bike/ car? Or are you simply interested in gathering some more information about the battle between bikes and cars? This article might give you some more insights. Here, we will cover the financial, environmental, family, time, physical health, and mental health aspect of this subject.

A lot of times people tell us a e-cargo bike is “too expensive”, or they ask others if it is expensive. The answer is “probably not as expensive as your 2nd car”.

One of our Urban Arrow ambassadors (Instagram: @c.j.eastaway) posted the following: 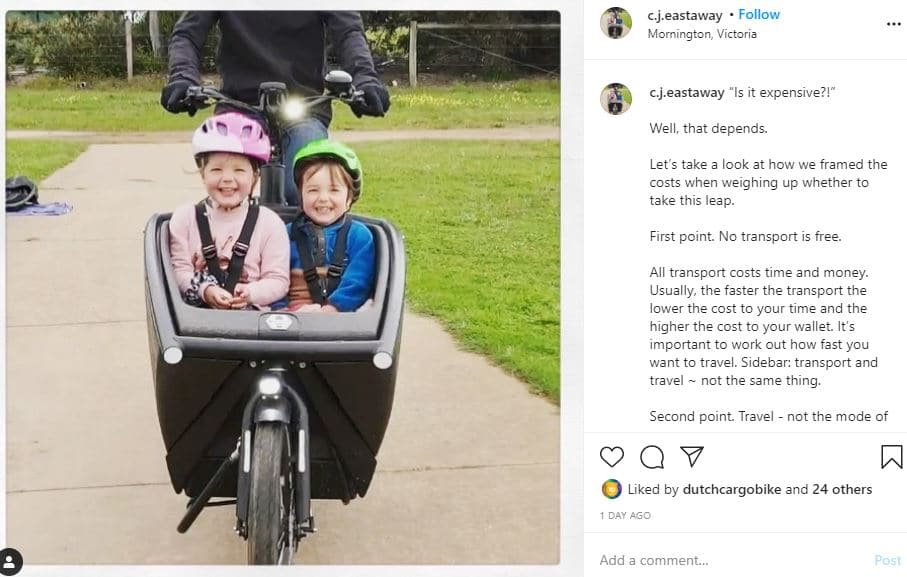 “Let’s take a look at how we framed the costs when weighing up whether to take this leap.

Second point. Travel – not the mode of transport – is usually fixed into a persons or families routine and is very hard to change.
Where we travel is mostly a by-product of where we live and where we hunt and gather. Without moving house, school, work etc. much of our weekly travel is non negotiable.

Third point. Not all travel is equal.
This is where the real problem – and real opportunity for doing something different – hides. We move our family through three types of travel in the following order of frequency.

Before we bought our Urban Arrow we used cars as transport for all our travel, even though most of our trips are less than 8km round trip. Because I commute – too far to ride and no train – I need a car. And because I need the car, Bron has always “needed” a second one! But Bron almost always travels in our first category – short trips around town. So, this bike was bought to replace our “need” for a second car.

That’s the frame you need to really understand how my answer to the question is “NO, it’s not expensive at all.”

Will this all be the same for you? No. You might not have the same travel requirements. You might rather drive a cheaper car (although that’s still more expensive than many people think!). You might ride a cheaper bike – let’s be clear here, we spent what we wanted to spend, not what we HAD to spend to change our transport. Or, this might just not be for you. That’s fine too. But if you’re curious, and you ask me “Was that thing expensive?!”, I’ll probably answer: That depends.”

We, from Dutch Cargo Bike, have also made a calculation based on information that can be found in reliable sources*, but also keeping in mind our 30+ years of experience. Our calculation is to show you the amount of money you can save in a time span of 8 years, when you decide to buy an e-cargo bike instead of a 2nd car.

Many people use less than a dollar of electricity per month when riding their e-bike. But, as you can see, it is not just daily riding cost. Other big savings include not paying for things like fuel, insurance, or parking. Some of these savings are more significant if you replace one car with an e-cargo bike. Even if you’re still paying for one car, every trip on an e-bike that leaves your car in the garage is guaranteed to save you money — and most importantly, it’s better for the environment.

It would not be fair to compare an e-bike to a diesel or petrol engine car. So, let us see what the benefits are for the environment – when you exchange your 2nd car for an e-bike.

The positive environmental impact of e-bikes exceeds that of electric cars by far, because of one simple reason – when you own an e-bike, you leave the car at home. Studies show that almost half of the e-bike trips would have been made by cars, if an e-bike had not been available. For commuters, this figure is as high as 94%! This results in a significant drop in transport related emissions, because as you might know, electric cars still use as much as 10 to 20 times the energy of micro mobility alternatives like e-bikes. A widespread adoption of e-bikes in cities could result in major reduction in overall car travel. In Europe, an e-bike reduces car travel by about 4 km a day. In the US and Australia, this figure is estimated to double that. A drop in car use on such a scale would have an immediate impact on a range of other environmental and health issues such as, congestion, street amenity, and air quality. 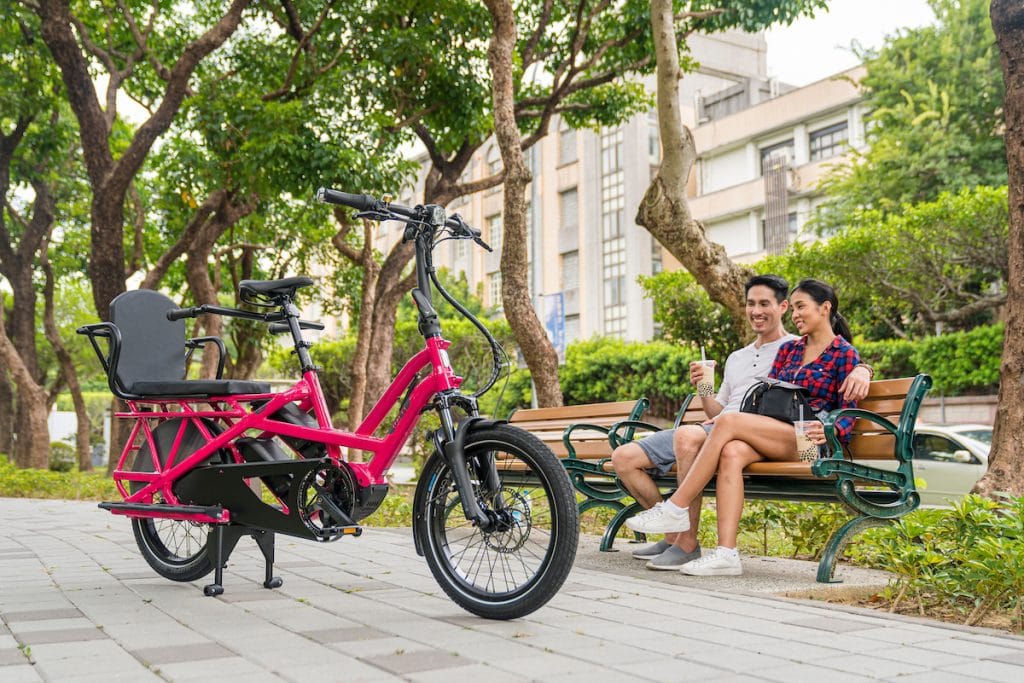 Just changing from a petrol engine car to an electric car is great, but the environmental impact is way to slow in the needed time frame. A study by the European Cyclist Federation showed the overall carbon footprint of e-bikes (22g Co2/km) as nearly identical to traditional pedal bikes (21g Co2/km). This is only one tenth of the emission produced by cars (271g Co2/km), and one fifth compared to buses (101g Co2/km). But, how can the carbon footprint of an e-bike be so close to that of a pedal bike? One reason is that an e-bike user expands less energy while riding, which results in consuming less carbs, hence a low carbon footprint.

And then there is the problem of too much traffic, especially in urban areas. Commuting by e-bike is actually faster than taking public transport or your car in most cities. Cyclist can take bike lanes to slip past city congestion and are able to take shortcuts through parks or other bike-friendly trails. As a cyclist you are rarely stuck in traffic and that is because you chose not to use the car. Traffic is the direct result of too many cars on the road at once. The more cars there are, the worse the traffic gets. It’s not rocket science. 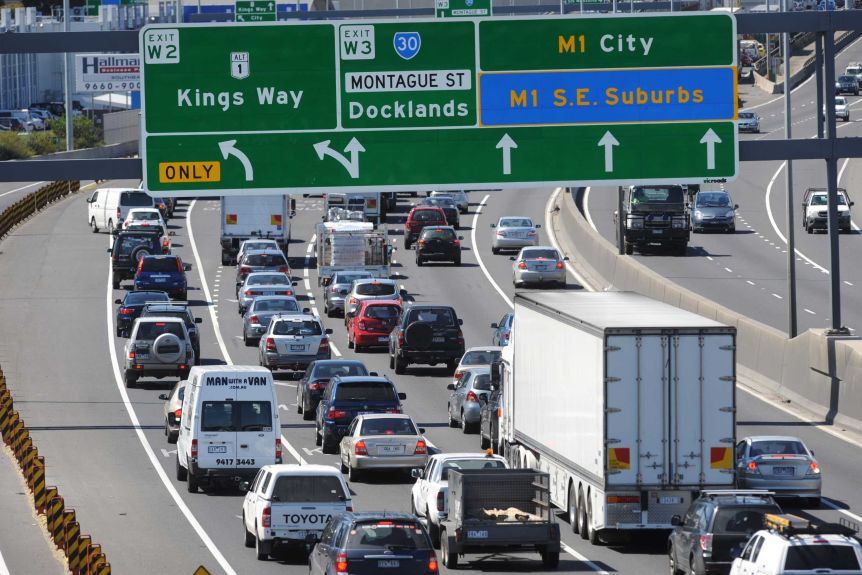 Thus, every driver who removes one car from the road and replaces it with a much smaller personal electric vehicle plays a part in reducing traffic for everyone. Studies have shown that even just 10% of drivers switching to bikes can have a 2-3x magnitude effect on congestion levels by preventing traffic from compounding on itself and spiralling out of control during heavy congestion hours.

Choosing and e-cargo bike over a car is not only a smart choice, but also a more fun one. Kids actually enjoy being in the front seat. The world is their playground and as a parent it is much easier to connect with your children when you can see them at all times. Our Urban Arrow ambassador @c.j.eastaway had the following to say about their experience as a family.

Our 5-year old, Maggie, describes the day Dutch Cargo Bike dropped off our cargo bike, as “the best day EVER!” Her parents agree, it’s certainly up there with other life highlights!

Our driving force for introducing a cargo bike into our lives was the impending inevitability of school drop offs with Maggie beginning Prep the following year. All our local schools were within 2km of our house, and whilst we weren’t sure which one we’d end up at, we knew one thing for sure – we were not going to sit in traffic in our car twice a day, five days a week to travel such a short distance. Thus, “DingDong” our Urban Arrow e-Cargo Bike AND family mental health coach. I also wrote down some dot point on the positives of being an e-cargo bike family. Time and time again it’s shown that cargo bikes can get the job done quicker in cities. Data from a cycle logistics hub set up in car-addicted Sydney in 2016, showed that cargo bikes travelled a third less kilometres than vans. Taking less than half the time to complete their rounds in the CBD. But how? Bikes are nimbler, can use cycle lanes, take shortcuts and park with ease. Meanwhile, vans spent three times as long parked up compared to bikes. And whilst bike couriers hardly needed to walk at all – having parked just outside the door, van drivers walked approximately a third of their total distance. In Sydney it’s evidently easier to just park and walk than to constantly drive around looking for parking spaces.

In the UK, they even filmed a commuter challenge. E-bike versus car.

A new study out of Brigham Young University has found that despite popular belief, electric bicycle riders get nearly as much exercise as pedal bike riders.

The study was conducted by the Department of Public Health at BYU and focused on comparing electric mountain bikes to standard mountain bikes. They determined the difference in user exercise between the two forms of bicycles.

To measure physical exertion, the study affixed heart rate monitors to riders while they traversed the same trail on both types of mountain bikes. Questionnaires were also used before and after the rides. These determined the subjects’ views towards electric bicycles and their perceptions of the difference between riding each type of bike. When researchers compared the riders’ perceptions of the amount of exercise they received to the actual data, things got interesting.

Interestingly though, the study’s questionnaires found that the riders perceived that the difference in exertion was actually much larger than in reality. Essentially, e-bike riders felt like they weren’t working nearly as hard as they were. That finding suggests that the e-bike might have been providing some sort of placebo effect. Or an increased confidence that helped offset the physical exertion in the riders’ minds. Read more here.

During Covid-19, most of us have been confronted with our mental health. But mental health is always an important topic in our life. A cargo bike helped us immensely at the most stressful time in our lives… 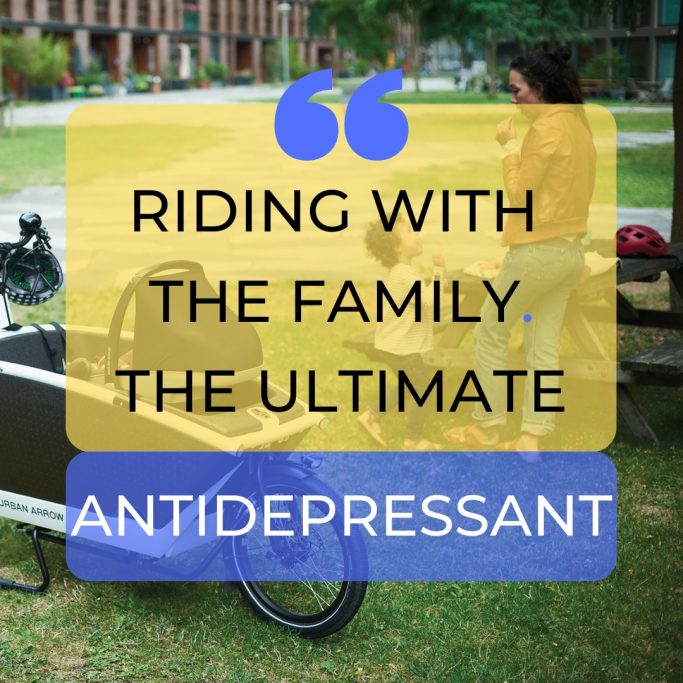 How the cargo bikes saved my sanity

With three kids under 19 months, life was busy. Getting from A to B was even busier. Getting all of them in the car, and once arrived at the destination getting everyone out, and keeping them safe in the parking lot… it was not easy and quite stressful.

Walking to the local park was fine, but more interesting parks were not within walking distance. Friends around the corner would be visited regularly on foot. Friends further away slowly moved to the background. It was just too hard. Too hard to get out of the house. Too hard with crying kids in the back of the car, and then too hard to get them out of the car safely.

My days existing of running the household, starting up a business and raising our 3 little bubs was challenging at times. The Dutch cargo bike definitely changed my, and our family’s, life. It has saved my sanity in these blissful challenging years!

With a Dutch Cargo Bike, I was able to:

In the industry we have something called the “e-grin”. It’s this goofy smile that people get the first time they spin the pedals or twist the throttle on an e-bike or scooter and feel the surge of power beneath them. There’s something that is just so fun and exciting about these vehicles that brings out the kid again in so many of us. They’re legitimate, hard-working commuter vehicles, for sure. But they’re still just such a hoot to ride around that they always bring a smile to my face. And I can just about guarantee that they’ll bring a smile to yours. If you would like to read more about the Dutch Cargo Bike family, read this article.