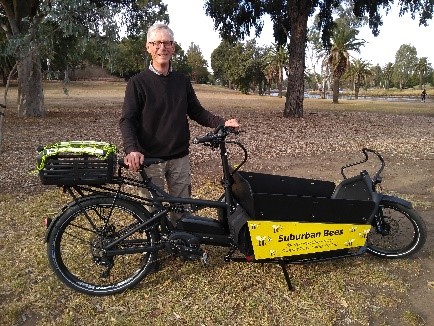 I’ve had my Riese and Muller Load 75 for about 3 years and, over this time, have travelled over 10,600 km on it. I bought my Carla Cargo trailer nearly 12 months ago. With this usage, now is a good time for me to review them both.

By way of context, I had three objectives in selecting a mode of transport: I wanted my transport choice to be as sustainable as I could achieve; I needed an option that met the needs of my beekeeping business and my lifestyle; and I wanted to use it as a vehicle for marketing.

The combination of a large capacity electric cargo bike and a commercial electric bike trailer met all of these objectives.  An electric bike is a highly sustainable transport option, especially when battery charging is supported by solar panels on my home.  My beekeeping business is a local operation carried out within 10 km of my home base, and the bike and trailer can carry up to 6 x 25kg honey boxes plus my beekeeping kit.  I have placed business signage on both sides of the bike’s cargo box and, with the yellow Carla trailer, am well recognised wherever I go.  I often get stopped in the street with questions about the bike and trailer, beekeeping and purchasing honey.

You pay a higher price for this very well-built cargo bike from Germany.  Everything on it is top of the range and, as my only business and personal transport, I have found it well worth the investment.

Without a load, the bike alone can cruise without much effort at about 27km/h.  I’ve not come to any incline that the bike can’t handle, with or without a load.  When the bike is combined with the electric Carla Cargo trailer, the road rules require you not to have both motors running at the same time.  While, as per the rules, I have never operated with the two going together, I think that my cruising speed would be more like 30km/h with or without a load.

The independent suspension on the bike is kind on my bees when I’m transporting them and also makes for a safer and smoother ride no matter what the terrain.  I configured the bike with two batteries and normally have a range of a good 90km plus per full charge, even with a heavy load. The gearing is a compromise.  On flat roads I often change up two gears at a time but, with a heavier load, all those gears come into their own.

The only times I’ve had to be careful riding the bike is when turning it in a tight circle at slow speeds.  With the long steering rod, the bike’s front wheel shudders.  I’ve adjusted my riding technique to overcome this, and I understand that the new model has a newer steering mechanism that may overcome this issue.

The disk brakes are a definite must with the loads I carry, and they pull the bike up as they should.  I found that original pads did not last long, and I had them upgraded to longer lasting ones.  The only downside with them is that they squeak when wet.  But that’s a small price to pay.

While the front cargo box was designed to carry up to 3 small children, it is big enough for me to carry a two-box beehive and beekeeping gear, which meets my needs.  The underfloor compartment on the bike is very handy and is where I store my emergency bike tools and other essential things.  While the cargo box is designed with a low centre of gravity, you still need to load it with care to ensure stability, make sure that objects are tied down and that they don’t interfere with the brake cables or handlebar.  I would have liked more tie down points on the box.  Sometimes I must put a ratchet strap right around the box to secure large items.

Parking and putting the bike on and off the stand can be tricky with a heavy load in the cargo box, particularly if on a hillslope.  To overcome this, and to increase my cargo carrying capacity, I explored trailer options.

I tried several cargo bikes before deciding on the Load 75 and despite the issues I’ve mentioned I think it’s a great solid and safe bike.  I would definitely recommend it.

I knew that having just a cargo bike for my bee business would be a compromise and that I really needed something bigger.  I lusted after the electric trailers being developed in Europe, particularly the Carla Cargo, but at the time they were not exporting them to Australia.  My compromise was buying a do-it-yourself bike trailer kit from Wike in Canada and making my own trailer (1.2 metres long).  While the trailer was good for light work, it was not designed for the heavy loads I wanted to carry.

Thrilled when I heard that Carla was to export their three wheeled trailers to Australia, I must have been one of the first customers to buy it through Dutch Cargo Bike.  However, the trailer was imported without the electric motor and I needed it motorised to meet my needs.  Dutch Cargo Bike partnered with Melbourne Powered Bike Store to install an electric front wheel motor and they did a great job. It took a few goes to get the electrics right, but the fine-tuning was well worth it.

For carry capacity, stability, and versatility, I cannot fault the Carla trailer.  It took just one short ride with both the bike and trailer to get used to it and I’ve not found any issues riding with the length or size of the bike and trailer setup.  It’s great.  The only downside was that I couldn’t have the back-wheel carrier and the trailer attached at the same time.

The Carla has an exceptionally good turning circle and, with its low centre of gravity, will take heavy loads up to 150kg.  I not only use it as a trailer for the bike but also as a hand cart.

Again, I would like tie down points on the cart.  The sidebars are OK for tying down large objects but not for things that are narrower than the sidebars such as timber.  Again, I resort to using ratchet straps that go under the trailer to secure such objects.  There is no back gate on the trailer, and I lost a part load once – my fault! – highlighting the need for care when securing the load.

I was after a transport solution that met my business needs, reflected who I am, and to market my business.  Both the Riese and Muller Load 75 and Carla Cargo trailer have achieved these for me.

I’m lucky enough to live in an urban area and, for my local business needs, using a bike and trailer makes business sense.  As more businesses turn to direct delivery and communities demand greater levels of environmental sustainability, I think there will be an increased use of electric cargo vehicles and trailers.

For people who are considering a cargo bike for carrying kids and shopping instead of a car, the Riese and Muller Load 75 should be one to test ride.  For businesses, light weight Electrical Vehicle solutions are now becoming very interesting and price-competitive.  They are worth investigating as they may met your needs.