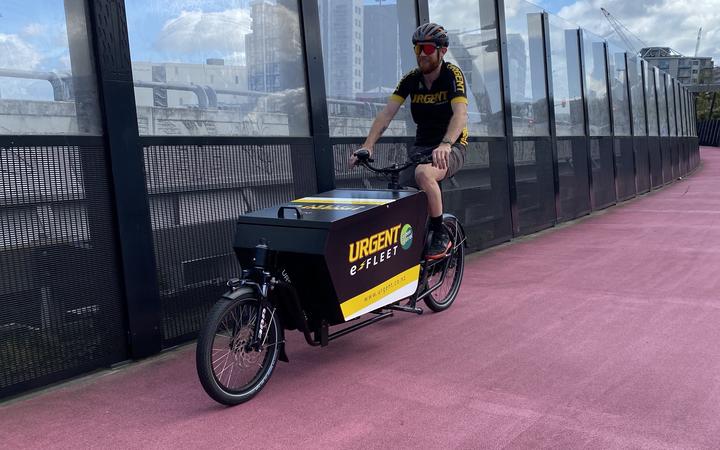 Urgent Couriers said it would save time and about 40 to 50 tonnes of carbon a year by replacing five vehicles with special electric bikes in the central city. Urgent Couriers said the bikes will be able to use the cycle lanes and not be constrained by traffic.
The company has imported purpose-built electric cargo bikes from Holland at a cost of $64,000 to service Auckland’s city centre and inner-city suburbs. The aluminium-framed bikes have a 250-watt motor and can carry up to 125kg in a lockable waterproof cargo box on the front of the bike. Urgent Couriers managing director Steve Bonnici said the bikes have a proven track record.”This will provide faster deliveries as the bikes will be able to use the cycle lanes and not be constrained by traffic.”It will reduce road congestion and it’s also great news for the environment.”The company previously had about a dozen cycle couriers delivering documents around Auckland’s CBD, but advances in information technology saw demand drop and there was just one now doing cycle deliveries. E-bike fleet manager Max Hampton said there were no parking restrictions for electric cargo bikes and there was enough room on Auckland’s central city footpaths to be parked against a building. He said an average cycle courier would cover 60km to 100km a day. The bikes can travel 100km between charges. Urgent Couriers received a grant of $20,000 from the Energy Efficiency and Conservation Authority (EECA) toward the cost of the bikes. Auckland Council, one of the company’s clients, is providing parking and charging stations at its central Auckland offices.
Urban Arrow bikes in stock