The bakfiets is simply the most sensible, useful and utilitarian bike I have ever ridden or can imagine. While I only had it for a few weeks, it was almost instantly integrated into my life and enabled me to do more by bike than I thought possible.

Box bikes put the load and the length in front, hence the wheelbarrow analogy, and this involves some mental adjustment, because you’re pushing the kids out in front at intersections. I found it easiest to think of riding box bikes like pushing a stroller. The length in the front of these bikes is in fact roughly comparable to the length of a stroller. As box bikes go, even the Bakfiets long (which is the one we tried) is on the shorter end, at 8 feet end to end. However, unlike a stroller, you can talk with your kids when you’re riding a box bike with them. I never really got the attraction of this until I actually tried it myself. Having the kids in the front of the bike is awesome.

The Bakfiets is a Dutch bike, with the traditional Dutch riding posture, which is bolt upright and gives an expansive view of the road. When I first got on the Bakfiets, I thought, “Whoa! This bike is tall!” Also traditionally Dutch is its design, which aims directly for indestructible without even a nod towards nimble or lightweight. The Bakfiets is intended to live outdoors in the Netherlands. You can leave this bike outdoors in this country as well; weather won’t bother it.

The Bakfiets’ indestructibility means that it has pretty nice components. That also means that this bike is not cheap. There is no free lunch in the world of cargo bikes. What you get for your money with a Bakfiets is kid-hauling capability and ease that no other bike we’ve ever ridden can match. However this bike was also designed for an environment where the only inclines are the dikes preventing the ocean from washing away the entire country, which no one has any reason to climb regularly. That means you’ll be hating life every time you hit a hill on a Bakfiets.

The pros of the Bakfiets: 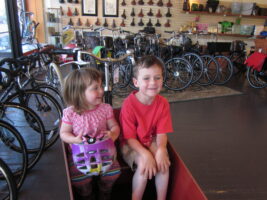 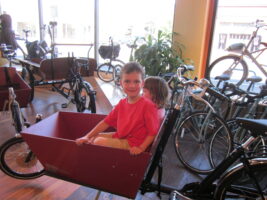 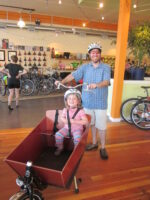 The cons of the Bakfiets:

Overall, I liked the Bakfiets a lot. Matt liked it less, mostly because of the upright posture, which does not appeal to him much. We are conditioned to think about hills all the time. But we both agreed that this bike was absolutely amazing for carrying children. And as far as our kids were concerned, when a Bakfiets was in sight, other bikes might as well not exist. They could be coaxed into investigating other box bikes and the trikes, and a tandem always gets their attention, but the longtails were dead to them. The Bakfiets is the family bike that other bikes aspire to be.

OR READY TO BUY? ORDER YOURS HERE